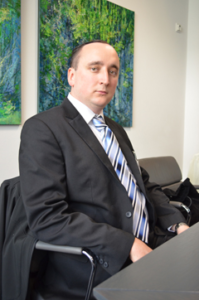 Senior Lecturer of Design and Operation of Electronic Devices Department

In 2003 he graduated from Chernetchin  school with an honorary diploma.

Since 2003 in 2007 studied at the Faculty of Electronic Devices of Kharkiv National University of Radio Electronics (KNURE). In 2007, received a bachelor’s degree with honors and a qualification in a specialist in the field of electronics and telecommunications.

In the period from 2007 to 2008 Master of the department of designing and operating electronic devices KNURE. In 2008,   Master’s degree with honors and a qualification as a researcher in the field of consumer electronics and telecommunications.

Since 2009 by 2012 Was a postgraduate student of the department of DOED. Works on completing a Ph.D. on “Models and Optimization of Information Collection in Wireless Sensor Networks”.

Trained at the Alstar Service Center of Samsung for repairing home appliances (2005);

Senior Lecturer at the Department of DOED 2015 – Present time.

Head of the scientific and educational laboratory “Controllers, microcontrollers and microprocessor means and systems in electronic devices”.

Works on completing a Ph.D. thesis on “Models and Optimization of Information Collection in Wireless Sensor Networks”.

Member of the jury of the All-Ukrainian Olympiad “Programming of Microprograms and Microcontroller Systems”.

Responsible person from KNURE for interaction with the Association of Industrial Automation Enterprises of Ukraine.

Prizewinner of the competition “KNURE – the best in the specialty” in the nomination “Teacher-assistant” 2nd place (2011-2012 academic year). Awarded an honorary diploma for many years of work, training and upbringing of student youth on the University Day (2012).